Issues and Choices in Industrialized Countries 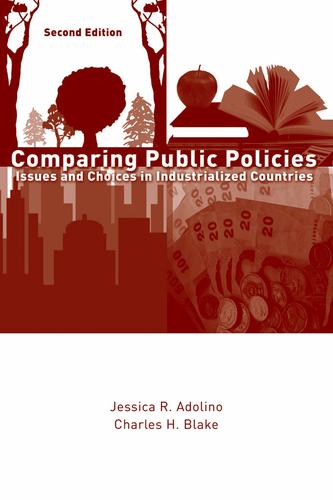 The study of comparative public policy reveals the intensely political nature of policy choices. While policy analysts often look to policy successes and failures outside their borders to draw valuable lessons and insights, cultural, economic, political, and institutional conditions vary from country to country and strongly affect how policy analysis is ultimately used. By combining a conceptual discussion of policy making with an examination of seven specific policy areas, Jessica Adolino and Charles Blake show how politics—in the realm of the environment, education, taxation, economics, immigration, health care, and social welfare—shapes policy choices.

The second edition of Comparing Public Policies has been revised and updated to reflect the most recent political and policy developments. This new edition expands coverage of the internationalization of domestic policy making by including a European Union case study in each issue area, along with further discussion of the role of international interest groups in the policy process.

The seven policy chapters have been revised and updated to examine current issues in the United States, Japan, Germany, France, the United Kingdom, Italy, and the European Union, such as:

the heightened calls for immigration policy reformthe return to higher budget deficits in several countriesthe efforts to lower tax rates in countries with falling expenditures and in countries with rising spending levelsthe often unsuccessful attempts to control increasing health care costs in countries with aging populationsthe spirited debate over the future role of the welfare state in an increasingly globalized economythe, at times, divergent education reform debates regarding the role of assessment and calls for decentralizationthe uneven environmental performance in the reduction of carbon dioxide emissionsChapters include analyses of cross­national trends—past and present—and a final chapter reexamines the internationalization of public policy in industrialized countries. Useful pedagogical features have been incorporated throughout the text, including "In Depth" boxes that offer detailed discussion of the political process or analytical techniques, and "Country At-a-Glance" boxes that provide quick reference to political institutions. A wealth of recent data is displayed in numerous tables and a glossary gives students a practical guide to terminology.