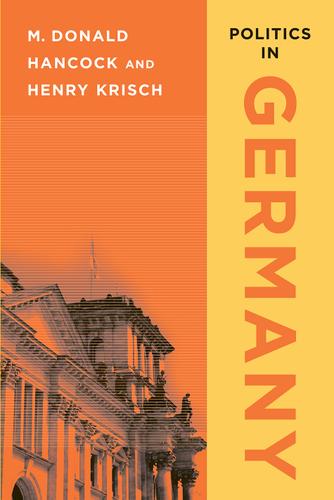 Take a sneak peak inside!Click on the links below to preview the Introduction and Chapter 1. Order your exam copy today by clicking on the "Request an Exam Copy" link above.
Introduction
Chapter 1

Germans born in the second decade of the last century will have been a subject of no less than six political regimes, seven if they lived in the former German Democratic Republic. Today, Germany’s democratic polity, pluralistic society, institutional structures, and market economy are growing increasingly strong. In clear and compelling prose, Hancock and Krisch argue that German politics today is the politics of a "normal" European democracy moving toward the EU. The authors discuss Germany’s course of modernization, which involves rapid industrialization and social development following the nation’s first unification in 1871 and its subsequent torturous course of political change embracing Imperial authoritarianism, the democratic experiment of the Weimar Republic, Nazi totalitarianism, and postwar variants of communism and Western-style democracy. Chapters detail the country’s political history, as well as its culture, new constitutional debates, parties, and economic policy, and culminate in a look at Germany in global context.

Adopt together with Politics in Britain and Politics in France and pass savings along to your students.
For pricing and ordering information, please contact us at mailto:collegesales@cqpress.com