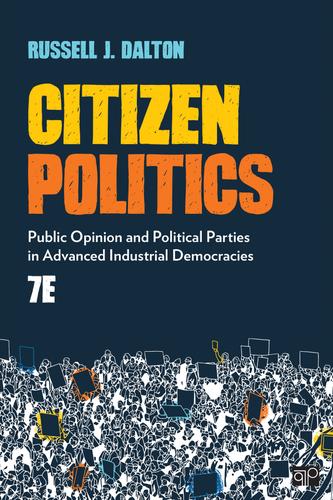 "The book’s combined focus on parties as institutions and systems, alongside political attitudes and behaviors, is why I use it…I have yet to find another text that accomplishes this."

Now, more than ever, people drive the democratic process. What people think of their government and its leaders, how (or whether) they vote, and what they do or say about a host of political issues greatly affect the further strengthening or erosion of democracy and democratic ideals. This fully updated, shorter Seventh Edition of Citizen Politics continues to offer the only truly comparative study of political attitudes and behavior in the United States, Great Britain, France, and Germany.

In addition to its comprehensive, thematic examination of political values, political activity, voting, and public images of government within a cross-national context, the updated edition of this bestseller explores how cultural issues, populism, Trump and far right parties are reshaping politics in contemporary democracies. All chapters have been updated with the latest research and empirical evidence. Further, Dalton includes recent research on citizens’ political behavior in USA, Britain, France, and Germany, as well as new evidence from national election studies in USA 2016, Britain 2017, France 2017, and Germany 2017.