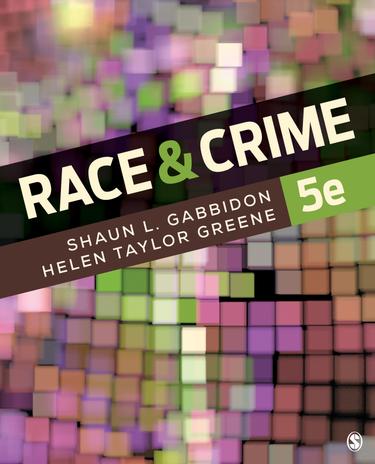 "This is a great tool that provides not only historical perspective but also incorporates additional resources to help expand the student’s ability to understand an issue and implications stemming from it."

Written by two of the most prominent criminologists in the field, Race and Crime, Fifth Edition takes an incisive look at the intersection of race, ethnicity and the criminal justice system. Authors Shaun L. Gabbidon and Helen Taylor Greene offer students a panoramic perspective of race and crime by expertly balancing historical context with modern data and research in thought-provoking discussions of contemporary issues. Accessible and reader-friendly, this comprehensive text illuminates the continued importance of race and ethnicity in all aspects of the administration of justice.

New to the Fifth Edition:

Instructors, sign in to the password-protected Instructor Site at study.sagepub.com/gabbidon5e for access to a Microsoft® Word test bank, chapter activities, SAGE journal articles, and more!