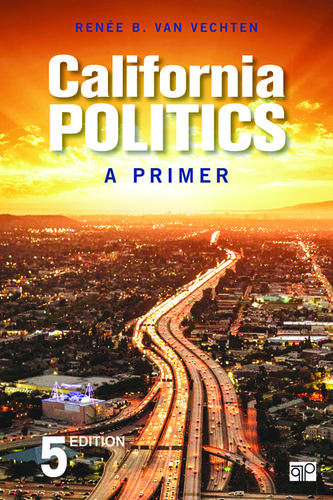 The thoroughly revised Fifth Edition of California Politics: A Primer concisely explains how California’s history, political culture, rules, and institutions come together to shape politics today and how they will determine the state of affairs tomorrow. Author Renee B. Van Vechten begins with a brief political history of California, then walks through direct democracy, the legislature, executive branch, and court system. She covers local government and concludes with a discussion of the state’s budget process, campaigns and elections, political engagement, and policy issues. From the structure of the state's government to its local representatives, policies, and voter participation, California Politics: A Primer delivers the concepts and details students need.

New to the Fifth Edition

An emphasis on California’s place in the federal system provides you with context around the state leadership's resistance to Trump administration policies on things like California’s sanctuary state status, immigration, the environment, and more.
Increased coverage of policy topics throughout the book helps you see how recent policy has impacted issues such as greenhouse gas emissions regulations, attempted “fixes” for water- and drought-related issues, new transportation projects, and prison reform.
Extended discussions of elections-related innovations introduce you to recent elections-related topics such as the Top-Two Primary, efforts to increase voter registration, all vote-by-mail elections, and redistricting.
New coverage of the “Five Californias” gives you a better understanding of California’s political geography and how distinct segments of the population are primed for political engagement or disaffection.
New lists of key terms with clear definitions at the end of each chapter enable you to review the content more effectively.
New and updated maps and graphics depict important topics such as California’s newly proposed high-speed rail project.