The Politics of the Presidency 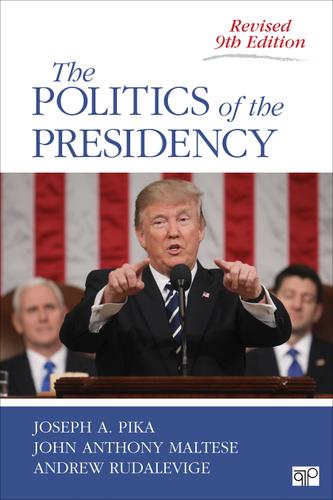 Trace the opening rounds of the Trump administration: highlighting the 2016 election, transition, inauguration, and first one hundred days.

Never losing sight of the foundations of the office, The Politics of the Presidency maintains a balance between historical context, the current political environment, and contemporary scholarship on the executive branch, providing a solid foundation for any presidency course. In addition to offering readers a comprehensive framework for understanding the expectations, powers, and limitations of the executive branch, the Revised Ninth Edition uses the most up-to-date coverage and analysis of the 2016 election and Trump administration to demonstrate key concepts.

New to the Revised Ninth Edition

A new chapter dedicated to the Trump transition and first one hundred days examines important topics such as the immigration ban and other executive orders; efforts at deregulation; the targeted military strikes in Syria; and the war on the intelligence community and the deconstruction of the administrative state.
Recent congressional relations analyzed, including the confirmation of Supreme Court justice Neil Gorsuch after Senate Republicans employed the "nuclear option" and took away the opportunity to filibuster Supreme Court nominees; efforts to repeal and replace Obamacare; fiscal 2017 and 2018 budget negotiations; and congressional investigations of the Trump campaign’s ties to Russia, his firing of FBI director James Comey, and the appointment of a special counsel in the matter.
An assessment of the public presidency reviews Trump’s approval ratings, communications strategies, and media coverage.
Discussions of Trump’s leadership challenges in a polarized age explain the difficulties of unifying a nation after a bitter election, launching an administration, and structuring the executive branch.