The Ethics of Dissent 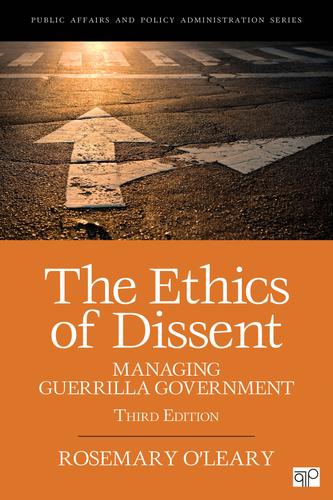 Winner of the 2021 "Best Book Award" from the Academy of Management Division of Public and Nonprofit Management!

"Rosemary O’Leary’s The Ethics of Dissent offers a novel take on rule breakers and whistle-blowers in the federal government. Finding a book that elegantly interweaves theory, case detail, and practice in a way useful to students and researching proves challenging. O’Leary achieves those aims."

From "constructive contributors"" to "deviant destroyers," government guerrillas work clandestinely against the best wishes of their superiors. These public servants are dissatisfied with the actions of the organizations for which they work, but often choose not to go public with their concerns. In her Third Edition of The Ethics of Dissent, Rosemary O’Leary shows that the majority of guerrilla government cases are the manifestation of inevitable tensions between bureaucracy and democracy, which yield immense ethical and organizational challenges that all public managers must learn to navigate.

New to the Third Edition:

New examples of guerrilla government showcase the power of public servants as well as their ethical obligations. Key concepts are connected to real examples, such as Kim Davis, the Kentucky county clerk who refused to sign the marriage certificates of gay couples, and Kevin Chmielewski, the deputy chief of staff for operations at the U.S. Environmental Protection Agency (EPA) who led environmental groups to the wrong doings of EPA Administrator Scott Prewitt.
A new section on the creation of "alt" Twitter accounts designed to counter and even sabotage the policies of President Donald Trump highlights the power of social media in guerrilla government activities.
A new section on the U.S. Department of State "dissent channel" provides readers with a positive example of the right way to dissent as a public servant.
A new chapter on Edward Snowden demonstrates the practical relevance and contemporary importance of the world’s largest security breach.
A new profile of U.S. Department of State diplomat Mary A. Wright illustrates how she used her resignation to dissent about U.S. policies in Iraq.