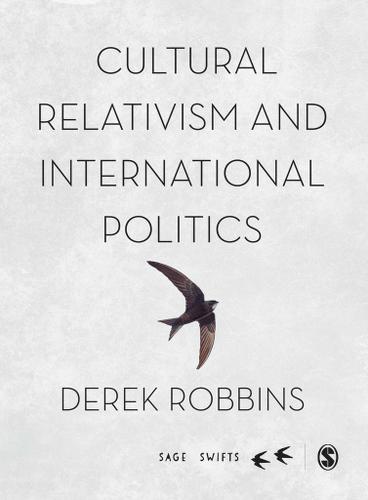 "The political and academic worlds are fractured by two competing discourses: the universalism of human rights and cultural relativism. This fracture is represented by the deep separation of cultural analysis and theories of international politics. Derek Robbins in a brilliant interrogation of European thinkers from Montesquieu to Pierre Bourdieu seeks to replace cultural relativism with cultural relationism as a step towards reconciling Enlightenment universalism and anthropological insistence on cultural difference. Inter alia he reflects on the tensions between political and social science and takes up the challenge from Raymond Aron to construct a sociology of international relations. A dazzling achievement."
- Bryan S. Turner, The Graduate Center, CUNY

Through historical studies of some of the work of Montesquieu, Comte, Durkheim, Boas, Morgenthau, Aron and Bourdieu, Derek Robbins examines the changing and competing conceptualisations of the political and the social in the Western European intellectual tradition.

He suggests that we are now experiencing a new ‘dissociation of sensibility’ in which political thought and its consequences in action have become divorced from social and cultural experience. Developing further the ideas of Bourdieu which he has presented in books and articles over the last twenty years, Robbins argues that we need to integrate the recognition of cultural difference with the practice of international politics by accepting that the ‘field’ of international political discourse is a social construct which is contingent on encounters between diverse cultures.

‘Everything is relative’ (Comte) and ‘everything is social’ (Bourdieu), not least international politics.