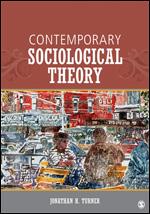 Written by award-winning scholar, Jonathan Turner, Contemporary Sociological Theory covers the range of diversity of theory in nine theoretical traditions, and variants of theoretical approaches in these traditions. The result is a comprehensive review of present-day theorizing in sociology covering functional, evolutionary, ecological, conflict, interactionist, exchange, structuralist, cultural, and critical theories and the major proponents of these theories. Moreover, for each theoretical tradition, it origins are examined in a separate chapter with an eye to how classical theorists influenced the work of key contemporary scholars. This book will serve as a valuable resource for those readers seeking in-depth and comprehensive coverage of contemporary traditions in their historical contexts.

Unlike many texts, coverage is comprehensive and deep. The theories and their origins are examined in detail so that readers can fully understand the origins and present profile of theories in present-day sociology. Unlike many texts that skim over theories on the surface, this book seeks to unlock for the reader their underlying structure of each theory. The book is written in a modular format so that theories and traditions can be examined in any order, and in many diverse combinations. If desired, only the contemporary theories can be read without attention to their historical contexts, or the reverse is true if readers want to understand the historical origins of a particular theoretical tradition.

Since Jonathan Turner is an active theorist in his own right, he brings to the book an appreciation of how theories are created as an insider rather than as only a commentator on theory. As such, he is able to bring out the underlying assumptions, structure, and form of a theory in new and interesting ways for casual readers and scholars alike.