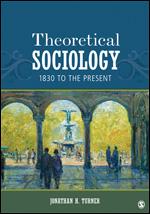 Written by award-winning scholar, Jonathan Turner, Theoretical Sociology: 1830 to the Present is a monumental book that offers like no other book in sociology both in-depth and comprehensive coverage of the classical and modern traditions in sociological theorizing. This is not a shallow review of theory, but a serious effort to understand theoretical sociology from its beginnings in the 1830s to its present profile today.

Part 1 is composed of detailed analyses of the theories of the classical tradition, including the works of August Comte, Herbert Spencer, Karl Marx, Max Weber, Georg Simmel, Emile Durkheim, and George Herbert Mead. Their theories are examined in detail and depth. As a result, the reader gets much more than a surface primer on the classical tradition; rather, analysis of each theorist in the classical tradition is comprehensive and deep, giving a reader a true understanding of the power of the ideas developed by theorists of the classical era. Part 1 closes with a long chapter summarizing how each of the key figures in sociology′s early pantheon influenced the development of contemporary theory, examined in Part 2.

Part 2 of the book examines all of the principle theoretical traditions in sociology during the modern era. Each chapter is long because both the diversity and depth of work in each theoretical approach is examined, including the functional, general systems, ecological, evolutionary, conflict, exchange, symbolic interactionist, role and status, dramaturgical, phenomenological, structuralist, cultural, postmodern, European-critical, and American-style critical theories.

Part 3 reviews the state of sociological theory today. First, the elements that make theory scientific are outlined. And then, Turner explores how to overcome roadblocks that have prevented sociological theories from realizing their full explanatory power. Coverage spans both classical and contemporary theoretical sociology, with an eye to giving readers complete coverage of theoretical sociology.

This one book is resource for both the classical and contemporary courses, thus providing a unified book for readers in a wide variety of theory courses.