The Rhetorical Dimensions of Terrorism 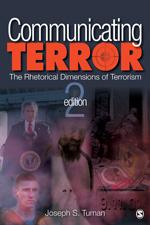 The only book to examine terrorism as a rhetorical act

"This is an excellent text in furthering our understanding of the web of language and how it creates our mediated realities – which reflect our culture, politics, religion, economics, etc. Students really like the case studies and how it complements the theory and practice of rhetoric. I think this book has applications for almost any course in communication."
—J. Gregory Payne, Emerson College

Author Joseph S. Tuman uses fascinating case studies and examples as he explores both dissent terrorism and state terror and looks at terrorism from a communicative perspective. Presenting terrorism as a process of communication between terrorists and multiple audiences, this book examines a range of rhetorical components, including definitions and labels, symbolism in terrorism, the relationship between terror and the media, and public oratory about terrorism—by both victims of terrorism and terrorists themselves.

New to the Second Edition

Includes three new chapters on public address and speeches concerning terrorism, symbols and targets of terror, and terrorism, rhetorical theory, and mass media.Offers new examples, case studies, speeches, and topic coverage, including expanded coverage of the Internet and the "War on Terror;" new material on Iran, Cambodia, Rwanda, Hamas and Hezbollah, and dirty bombsProvides expanded treatment of rhetoric and theory with a focus on ideological criticism, neo-classical criticism, dramatism, and media-centered terrorismExamines diverse acts of terrorism—not just 9/11 or the recent events in the Middle East—to show the history and various usages of these acts as a medium for communicationIncludes real case studies of terrorists and terror acts that make applying rhetorical theory practical and accessible