Encyclopedia of Play in Today's Society 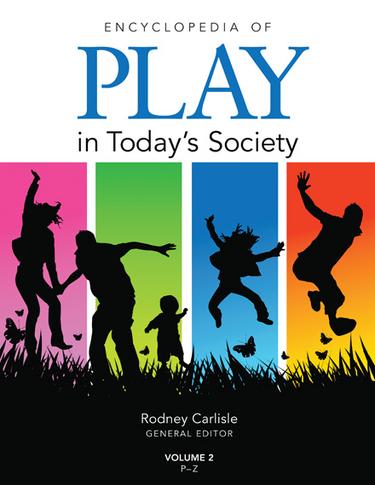 "This ground-breaking resource is strongly recommended for all libraries and health and welfare institutional depots; essential for university collections, especially those catering to social studies programs."
—Library Journal, STARRED Review

Children and adults spend a great deal of time in activities we think of as "play," including games, sports, and hobbies. Without thinking about it very deeply, almost everyone would agree that such activities are fun, relaxing, and entertaining. However, play has many purposes that run much deeper than simple entertainment. For children, play has various functions such as competition, following rules, accepting defeat, choosing leaders, exercising leadership, practicing adult roles, and taking risks in order to reap rewards. For adults, many games and sports serve as harmless releases of feelings of aggression, competition, and intergroup hostility.

The Encyclopedia of Play in Today's Society explores the concept of play in history and modern society in the United States and internationally. Its scope encompasses leisure and recreational activities of children and adults throughout the ages, from dice games in the Roman Empire to video games today. With more than 450 entries, these two volumes do not include coverage of professional sports and sport teams but, instead, cover the hundreds of games played not to earn a living but as informal activity. All aspects of play—from learning to competition, mastery of nature, socialization, and cooperation—are included. Simply enough, this Encyclopedia explores play played for the fun of it!

Available in both print and electronic formatsProvides access to the fascinating literature that has explored questions of psychology, learning theory, game theory, and history in depthConsiders the affects of play on child and adult development, particularly on health, creativity, and imaginationContains entries that describe both adult and childhood play and games in dozens of cultures around the world and throughout historyExplores the sophisticated analyses of social thinkers such as Huizinga, Vygotsky, and Sutton-Smith, as well as the wide variety of games, toys, sports, and entertainments found around the worldPresents cultures as diverse as the ancient Middle East, modern Russia, and China and in nations as far flung as India, Argentina, and France

For a subject we mostly consider light-hearted, play as a research topic has generated an extensive and sophisticated literature, exploring a range of penetrating questions. This two-volume set serves as a general, nontechnical resource for academics, researchers, and students alike. It is an essential addition to any academic library.