Encyclopedia of Race and Crime 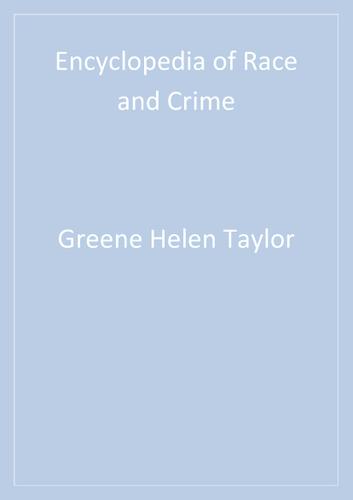 "The organization of the reader′s guide—especially the groupings of landmark cases, race riots, and criminology theories—is impressive … Other related titles lack the breadth, detail, and accessibility of this work … Recommended for all libraries; essential for comprehensive social studies collections."
—Library Journal

The Encyclopedia of Race and Crime covers issues in both historical and contemporary context, with information on race and ethnicity and their impact on crime and the administration of justice. These two volumes offer a greater appreciation for the similar historical experiences of varied racial and ethnic groups and illustrate how race and ethnicity has mattered and continues to matter in the administration of American criminal justice.

Covers a number of broad thematic areas: basic concepts and theories of criminal justice; the police, courts, and corrections; juvenile justice; public policy; the media; organizations; specific groups and populations; and specific cases and biographiesAddresses such topics as gender, hate/bias crimes, immigrant experiences, international and cross-cultural issues, race and gangs, and race and law, Presents experiences of all major racial and ethnic groups in the U.S., including Asians, Blacks, Latinos, Native Americans, and Ethnic Whites, as well as religious minorities, such as MuslimsIncludes coverage of recent incidents like the alleged rape of a black female North Carolina Central University student by white male members of the Duke University Lacrosse Team;, the Jena 6 incident; the Tulia, Texas drug arrests; the Rodney King beating; the O. J. Simpson trials in the 1990s; and more recent racial profiling incidentsTwo appendices provide information on locating and interpreting statistical data on race and crime, as well as detailed instructions on how to access statistical data on the web for such specific areas as arrests, drugs, gang membership, hate crimes, homicide trends, juvenile justice, prison populations, racial profiling, the death penalty, and victimization

Because the topic of race and crime is of wide interest and relevance, entries in this Encyclopedia are written in an accessible style to appeal to a broad audience, making it a welcome addition to academic and public libraries alike.