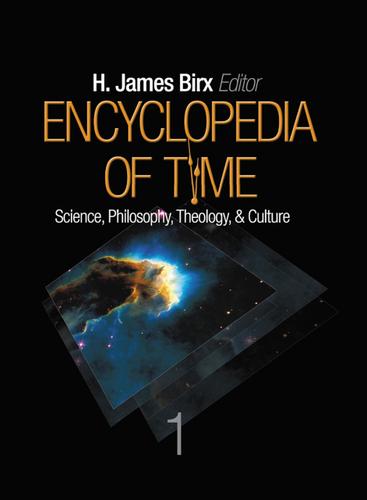 "With a strong interdisciplinary approach to a subject that does not lend itself easily to the reference format, this work may not seem to support directly academic programs beyond general research, but it is a more thorough and up-to-date treatment than Taylor and Francis′s 1994 Encyclopedia of Time. Highly recommended."
—Library Journal STARRED Review

Surveying the major facts, concepts, theories, and speculations that infuse our present comprehension of time, the Encyclopedia of Time: Science, Philosophy, Theology, & Culture explores the contributions of scientists, philosophers, theologians, and creative artists from ancient times to the present. By drawing together into one collection ideas from scholars around the globe and in a wide range of disciplines, this Encyclopedia will provide readers with a greater understanding of and appreciation for the elusive phenomenon experienced as time.

Features Surveys historical thought about time, including those ideas that emerged in ancient Greece, early Christianity, the Italian Renaissance, the Age of Enlightenment, and other periodsCovers the original and lasting insights of evolutionary biologist Charles Darwin, physicist Albert Einstein, philosopher Alfred North Whitehead, and theologian Pierre Teilhard de Chardin Discusses the significance of time in the writings of Isaac Asimov, Samuel Taylor Coleridge, Fyodor M. Dostoevsky, Francesco Petrarch, H. G. Wells, and numerous other authorsContains the contributions of naturalists and religionists, including astronomers, cosmologists, physicists, chemists, geologists, paleontologists, anthropologists, psychologists, philosophers, and theologiansIncludes artists′ portrayals of the fluidity of time, including painter Salvador Dali′s The Persistence of Memory and The Discovery of America by Christopher Columbus, and writers Gustave Flaubert′s The Temptation of Saint Anthony and Henryk Sienkiewicz′s Quo VadisProvides a truly interdisciplinary approach, with discussions of Aztec, Buddhist, Christian, Egyptian, Ethiopian, Hindu, Islamic, Navajo, and many other cultures′ conceptions of timeKey ThemesBiographyBiology/EvolutionCulture/HistoryGeology/PaleontologyPhilosophyPhysics/ChemistryPsychology/LiteratureReligion/TheologyTheories/Concepts