Making Identities in a Changing World 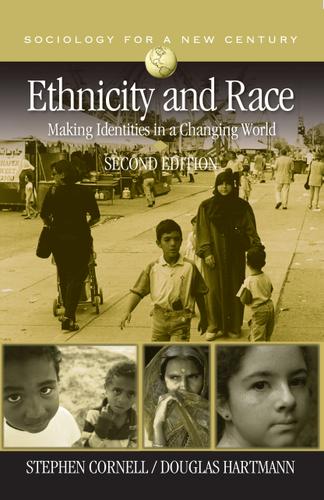 "This book is very well written and clearly organized throughout. It is pitched at upper-level undergraduate and graduate-level race and ethnicity students...in sum, this is an important book, highly recommended to students and faculty alike. The authors draw extensively from classic and contemporary sociological theory throughout the text and maintain a transnational focus in each and every chapter." —TEACHING SOCIOLOGY

"I used Cornell′s earlier edition for years and consider it to be one of the best explanations/ examinations of race and ethnic relations around."—Margot Kempers, Fitchburg State College

Ethnicity and Race: Making Identities in a Changing World, Second Edition uses examples and extended case studies from all over the world to craft a compelling, even-handed account of the power and persistence of ethnicity and race in the contemporary world. Known for its conceptual clarity, world-historical scope, and fair-minded treatment of these oft controversial topics, this updated and expanded edition retains all of the core elements and constructionist insights of the original.

New to the Second Edition:

Provides new concrete examples from around the world: Dozens of new examples have been added, including extended case studies of ethnic/identity construction in the former Yugoslavia, South Africa, and New Zealand. In addition, several new sections discuss treatments of neo-assimilation and segmented assimilation, and the invisibility of racial dominance. Incorporates the latest research and thinking in the field: Motivated by the suburban uprisings of 2005, an extended case study of race, culture, and belonging in contemporary France is fashioned. The theoretical underpinnings of this unique synthesis of race and ethnicity are sharpened throughout the volume, and the authors incorporate some of their own recent work on ethnic and racial analytic frames to sketch out broader implications for the field and possibilities for the future. Discusses the emergence of modernity and globalization: The authors demonstrate why ethnic and racial boundaries over the last 30 years and contrary to earlier, optimistic predictions have become stronger and more strident under the pressures of modernization, mass communication, and secularization. The book concludes by discussing how the downward spiral of hate and separateness can be halted, and even reversed.
Intended Audience:
This influential text is ideal for advanced undergraduate courses on race and ethnicity such as American Race Relations; Racial and Ethnic Relations; Ethnic Conflict; Comparative Race Relations; Cultural Diversity; Immigration Studies in the departments of Sociology, Ethnic Studies, Global Studies, and Anthropology.