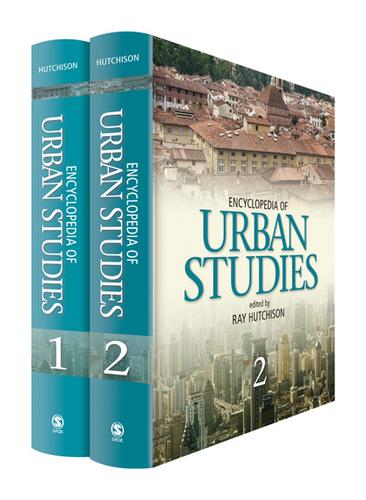 The United Nations estimates that by 2030, more than two-thirds of the total world population will live in urban areas. Most of this increase will take place not in Europe or in the United States but in the megacities and newly emerging urban regions of what used to be called the developing world.

Urban studies is an expansive and growing field, covering many disciplines and professional fields, each with its own schedule of conferences, journals, and publication series. These two volumes address the specific theories, key studies, and important figures that have influenced not just the individual discipline but also the field of urban studies more generally. The Encyclopedia of Urban Studies is intended to present an overview of current work in the field and to serve as a guide for further reading in the field.

Includes important work and traditions from each of the urban disciplines, including urban anthropology, urban economics, urban geography, urban history, urban politics, urban psychology, and urban sociologyAddresses both the growth and expansion of urban areas (urbanization) and the nature and quality of urban life (urbanism)Demonstrates the international and interdisciplinary nature of the field with contributions from scholars in many different countriesConfronts a number of important issues, ranging from individual problems of poverty to societal problems of provision of adequate housing and social exclusionProvides entries on a number of cities, including those in different historical periods and regions of the world and those that have been important in the development of urban studies

The Encyclopedia of Urban Studies serves as an introduction to topics of significance in urban studies for an audience that includes undergraduate students, beginning graduate students of urban studies and the related urban disciplines, a broader public that has an interest in the new urban world, and even established teachers and scholars who are exploring new areas of study.