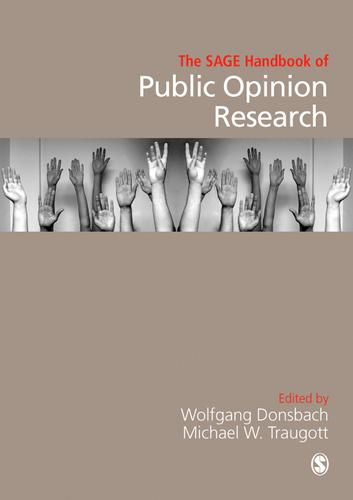 ′Some of the most experienced and thoughtful research experts in the world have contributed to this comprehensive Handbook, which should have a place on every serious survey researcher′s bookshelf′ - Sir Robert Worcester, Founder of MORI and President of WAPOR ′82-′84.

′This is the book I have been waiting for. It not only reflects the state of the art, but will most likely also shape public opinion on public opinion research′ - Olof Petersson, Professor of political science, SNS, Stockholm, Sweden

′The Handbook of Public Opinion Research is very authoritative, well organized, and sensitive to key issues in opinion research around the world. It will be my first choice as a general reference book for orienting users and training producers of opinion polls in Southeast Asia′ - Mahar K. Mangahas, Ph.D., President of Social Weather Stations, Philippines (www.sws.org.ph)

′This is the most comprehensive book on public opinion research to date′ - Robert Ting-Yiu Chung, Secretary-Treasurer, World Association for Public Opinion Research (WAPOR); Director of Public Opinion Programme, The University of Hong Kong

Public opinion theory and research are becoming increasingly significant in modern societies as people′s attitudes and behaviours become ever more volatile and opinion poll data becomes ever more readily available. This major new Handbook is the first to bring together into one volume the whole field of public opinion theory, research methodology, and the political and social embeddedness of polls in modern societies. It comprehensively maps out the state-of-the-art in contemporary scholarship on these topics.

With over fifty chapters written by distinguished international researchers, both academic and from the commercial sector, this Handbook is designed to:

- provide an overview of the social, political and legal status of public opinion research, how it is perceived by the public and by journalists, and how it is used by governments

- offer a review of the role and use of surveys for selected special fields of application, ranging from their use in legal cases to the use of polls in marketing and campaigns.

The Handbook of Public Opinion Research provides an indispensable resource for both practitioners and students alike.