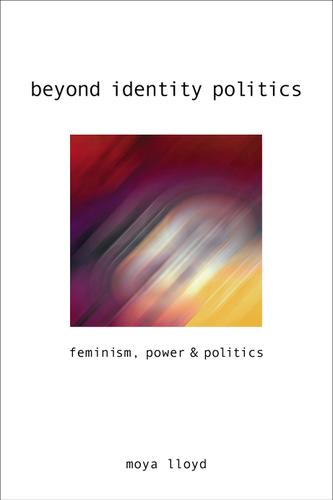 Recent debates in contemporary feminist theory have been dominated by the relation between identity and politics. Beyond Identity Politics examines the implications of recent theorizing on difference, identity and subjectivity for theories of patriarchy and feminist politics.

Organised around the three central themes of subjectivity, power and politics, this book focuses on a question which feminists struggled with and were divided by throughout the last decade, that is: how to theorize the relation between the subject and politics. In this thoughtful engagement with these debates Moya Lloyd argues that the turn to the subject in process does not entail the demise of feminist politics as many feminists have argued. She demonstrates how key ideas such as agency, power and domination take on a new shape as a consequence of this radical rethinking of the subject-politics relation and how the role of feminist political theory becomes centred upon critique.

A resource for feminist theorists, women's and gender studies students, as well as political and social theorists, this is a carefully composed and wide-ranging text, which provides important insights into one of contemporary feminism's most central concerns.