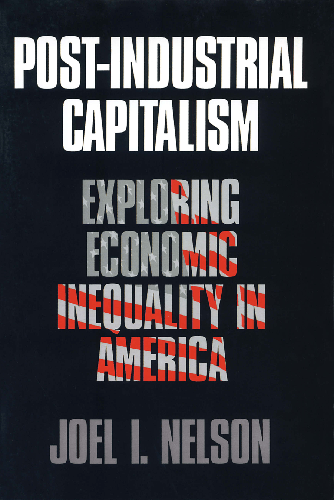 "The work is provocative and ambitious and the writing is clear."
--Choice
"It is a topic in need of systematic analysis. . . . Joel I. Nelson understands and, in fact, has mastered the issues. . . . It will undoubtedly be a major contribution. . . . His approach is fresh and refreshing. . . . He has the appropriate conceptual tools to complete his synthesis. . . . I believe not only scholars--sociologists, economists, political scientists, and historians, would find Post-Industrial Capitalism useful but policymakers might also find it of interest. . . . The book can also be used as a text in an advanced undergraduate class and in a graduate seminar. . . . Nelson′s thesis is coherent and logically developed. . . . I imagine this book as a college text or on a desk in Washington, DC. . . . Nelson′s last book Economic Inequality was a huge success. . . . Certainly the many who relied on it in their teaching and research will welcome and use Post-Industrial Capitalism."
--Lionel L. Lewis, State University of New York at Buffalo
"Too often authors focus only on the positive aspects or on the downside of postindustrialism. Joel I. Nelson is proposing something that fits neatly between the two camps. . . . Nelson′s strategy of building a new explanation based on a synthesis of these older approaches is very attractive. . . . There are no other books that attempt this. . . . Post-Industrial Capitalism might also be used in an advanced undergraduate course on economic sociology or social change. . . . [It] will be also acquired by professionals in sociology, social work, political science, and economics. . . . The sequence of the topics are clear and concise. . . . Each chapter pulls together arguments that--heretofore--have been scattered across numerous books and articles (and across disciplines for that matter)."
--Charles M. Tolbert II, Professor of Sociology and Rural
Sociology, Louisiana State University
The social and economic well-being of many Americans is increasingly at risk. Disparities in earnings and wealth are escalating, reversing a century of declining inequality. Excesses of the free market are growing-and growing more difficult to contain. Politics are increasingly conservative across the ideological spectrum, with economic competitiveness considered more important than equality and humanitarian aid. Post-Industrial Capitalism offers an alternative to the dominant and unsuccessful Marxist and industrialist views by providing a framework for explaining the widening polarization within American society. This work demonstrates a more comprehensive explanation of inequality and locates its source in the transformation of American business. It provides a fresh illustration of Schumpeter′s insistence on the ability of capitalism to develop by creatively destroying its past. It not only describes the shifts in corporate resources, illustrates their use by the corporate sector, and traces their implications for inequality across the institutional spectrum, but also demonstrates how these strategies have been used by companies to intensify competition, effect greater political control, and widen the economic gap in America.
Scholars interested in the question of modernity and post-industrialization, theorists of multiple theoretical persuasions, and students interested in social stratification, inequality, and social change will find Postindustrial Capitalism to be extremely valuable.