The HIV Epidemic and Lesbians and Gay Men 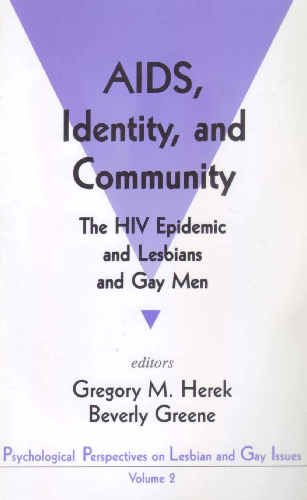 "HIV alters the lives of anyone that it touches, whether they are gay or straight. This book looks at all of the aspects of how HIV/AIDS has altered the lives of those it touches. . . . The titles of the 12 chapters give an excellent overview of what is covered in these extremely well-written reports. . . . This is a must-read book for everyone. It should be in all libraries, including school libraries. Young adolescents who are facing the problem of coming out would benefit from this book."
--AIDS Book Review Journal
Hit hard by the AIDS epidemic in the United States and in much of Europe, the gay and lesbian community has been forced to examine existing notions of what it means to belong to a community based on sexual orientation. The editors of this second volume in the annual series Psychological Perspectives on Lesbian and Gay Issues have collected a perceptive array of chapters that explore sexual behavior, personal identity, and community memberships of gay men and lesbian women. With the exception of a few, the chapters reflect study findings from AIDS-related research and include discussions of AIDS in large urban centers and in less populated settings outside of major AIDS epicenters. Focusing on underconsidered AIDS populations, the contributors explore specific topics concerning the AIDS epidemic among gay and bisexual men of color, lesbian women, and gay and lesbian youth. Accessible and sensitive, the book also examines relevant public policy, volunteerism, and long-term survival as important to AIDS awareness and education.
AIDS, Identity, and Community is an appreciable resource for AIDS researchers and caregivers, mental health practitioners, social service professionals, behavioral and social science students, and any reader who seeks deeper insight into the complex and subtle areas of the lesbian and gay community in the AIDS era.