The Indigenous Voice in World Politics 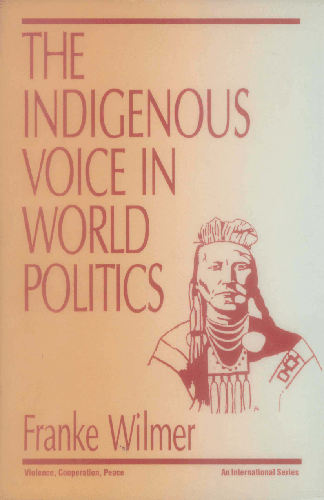 Indigenous peoples represent the unfinished business of decolonization. In this fascinating volume, Franke Wilmer examines how indigenous activists are cultivating international support for a program of self-determination and legal protection, as well as how "the indigenous voice in world politics" is transforming civic discourse within the international community. With the United Nations designation for 1993 as the "Year of Indigenous Peoples," this book could not be more timely in its subject matter or in its scale of coverage.
The Indigenous Voice in World Politics will serve as a benchmark text for students in ethnic studies, political science, development studies, sociology, and international relations.
"The topic area that Dr. Wilmer has defined is a vital one that will appeal to a broad and growing audience. It is not only of great importance and interest morally and politically, but (in Wilmer′s hands) of great significance intellectually. Indeed, Wilmer′s ability to combine the moral/political with the intellectual/theoretical is exceptional, and a great source of this project′s originality and power. This book will find readers among human rights activists, ethnologists, sociologists, cultural anthropologists, students of international relations, and laypersons interested in indigenous peoples, especially American Indians. This is an impressive project."
--Richard H. Brown, University of Maryland at College Park
"This is one of the few times anyone from the political science discipline has taken a very good cross view of what has transpired in indigenous cultures."
--Ron LaFrance, American Indian Program, Cornell University
"The Indigenous Voice in World Politics stands as a benchmark text for use in both undergraduate and graduate courses emphasizing or including consideration of the international status of indigenous peoples."
--Ward Churchill, American Indian Studies,
University of Colorado at Boulder
"While Wilmer′s analysis of the legal and philosophical debate on the status of indigenous peoples draws heavily on the U. S. experience, specific examples of the fate of these communities are drawn from all around the globe. This book would make an excellent text for courses in American Indian studies, political science, international relations, and international law, as well as a useful supplementary text for courses on ethnic and racial minorities."
--Sociological Imagination