The Production of Culture

Media and the Urban Arts 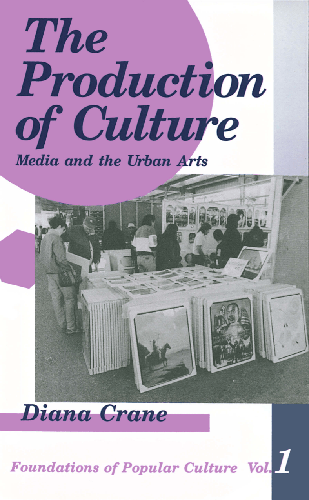 "The Production of Culture is timely and relevant. . . . Diana Crane introduces the reader to this busy field of scholarly activity, organizes the strands of theory and empirical research in an orderly fashion, and advances some bold notions about the relationship between organizational ′contexts′ and innovation."
--Contemporary Sociology
"Crane melds numerous sources concisely and clearly in her argument that cultural forms cannot be understood ′apart from the contexts in which they are produced and consumed.′ . . . looks like a good start to a useful series."
--Communication Booknotes
"Crane′s overview is clearly written and does an effective job of incorporating concepts and theories from communication, cultural studies, economics, and literature, as well as her home territory, sociology."
--Communication Booknotes
How does the media shape and frame culture? How does media entertainment vary under different conditions of production and consumption? What types of meanings and ideologies do these modes of production convey, and how do they change over time? How does media culture differ from other forms of recorded culture produced in nonindustrial settings? In The Production of Culture, the inaugural volume in the new Foundations of Popular Culture series, Diana Crane argues that these are the kinds of questions social scientists should concern themselves with. She contends that recorded cultures simply cannot be understood apart from the contexts in which they are produced and consumed. A review and synthesis of the current media literature, Crane′s work examines both the popular and elite levels of media production. This investigation allows readers to understand how the notion of production can change depending on the size of the audience and/or the structure of the cultural industry.
A systematic and accessible approach to a complex topic, The Production of Culture will have appeal not only to professors and students of cultural studies, but will also interest those studying sociology and art history.