The Russian Army in a Time of Troubles 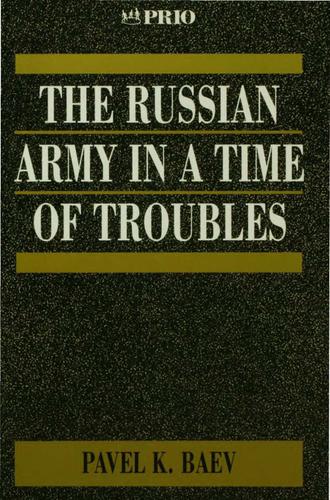 This study of the Russian army and how it has fared in the uncertain transitional period since independence in December 1991 provides the basis for understanding its present and potential future role in the new political developments within Russia.

Following an historical overview of Russia′s security agenda and an examination of the Russian/Soviet army′s tradition of involvement in politics, the book then examines Russia′s current security interests and the role of the army in protecting them. Geopolitical perspectives are linked to the security issues of the `Near Abroad′, and to the nuclear dimension of security. Pavel K Baev then considers the question of the feasibility of political control over the Russian army. The problem of the politicization of the army is followed through the interlinked issues of stalled military reform and a drastically reduced military budget. Baev examines the current military role of the army with case studies on conflict management in the Caucasus and the army′s performance in the role of peace-keeper in the Chechen War. Finally, the place of the army in Russia′s peace-keeping activities within a broader European context is examined.