The Rhetorical War Over Sexuality 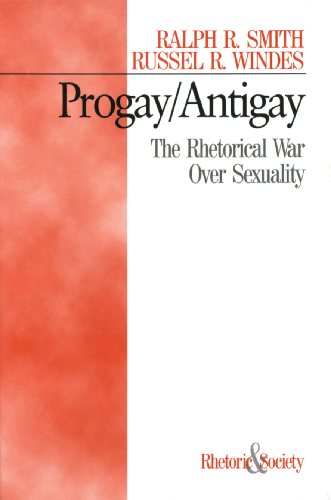 Combining humanistic rhetorical criticism with social scientific concepts, Ralph R. Smith and Russel R. Windes examine how the discourse of the progay/antigay debate shapes the self-understanding and strategies of the two opposing sides.

The struggle over issues such as lesbians and gay men serving openly in the military, same-sex marriage, and inclusion of "sexual orientation" in anti-discrimination and hate crime laws have evolved along with the development of rival progay and traditionalist antigay communities. In the process of presenting their arguments to the wider society, the two sides exercise extraordinary influence on each other. As a result of the public policy debates, the progay movement has moved toward an essentialist, non-sexual identity, while the traditionalists have shifted toward a secular public self-representation. Progay/Antigay also analyzes the internal disagreements within the two movements.

The same-sex marriage debate illustrates important dimensions of the contest over sexuality. The authors examine rhetorical strategy and counter-strategy in this specific institutional context. Progay/Antigay also discusses how the study of the variant sexuality issue provides the opportunity to assess paths for reconciliation and to judge concepts of political pluralism and multiculturalism.