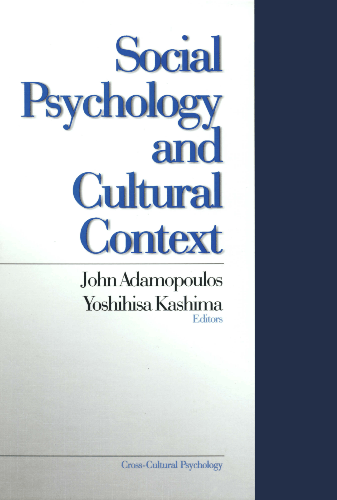 "Individually and collectively, the pieces balance cross-cultural psychology′s interest in the large scale community with psychology′s traditional emphasis on small groups, interpersonal processes, and individual thought, feeling, and action. The chapters range in topic, in level of analysis, and in emphasis on theory and application, but they harmonize to map the field - identifying where it has been and how it might develop. The central theme is that culture and individual psychology are inseparable and that understanding both will lead to a more comprehensive understanding of human behavior than either perspective in isolation. The book delivers: It offers important insights on the commonalties, universality, and uniqueness of human behavior. The book is dedicated to Harry C. Triandis and is truly a tribute to his work." — John F. Dovidio, Department of Psychology, Colgate University "In this book, cross-cultural psychologists from around the world honor the discipline′s founding father, Harry C. Triandis. The book has become a perfect overview of the state of the art in cross-cultural psychology." — Geert Hofstede, Tilburg University, The Netherlands "The past 10 years or so have seen a sharp increase in the number of college and university courses throughout the world that focus on culture as a powerful force that shapes the thought and behavior of all humans. It would be most difficult to organize and teach one of these courses without mentioning Triandis′s influence numerous times. I am extremely pleased that this book has been added to the cross-cultural literature." — from the Foreword by Walter J. Lonner, Western Washington State University This book celebrates Harry Triandis′s overall contribution to culture and social psychology in general, and his most original and significant contribution to this area, the concept of subjective culture. In this volume, top cross-cultural researchers who are deeply familiar with Triandis′s work critically examine the concept of subjective culture from a number of perspectives and extend it in many new directions of basic and applied social psychology. The result is an up-to-date examination of various topics and areas of social psychology from the unique perspective of subjective culture. One significant feature of this book is an attempt at framing and situating the concept of subjective culture within the current theoretical discourse on culture and psychology. Social Psychology and Cultural Context is the first survey of social psychology to integrate cross-cultural issues. This book not only utilizes several variants of the construct of subjective culture but also reflects the current state of affairs in the social domain of cross-cultural psychology. Written by world-renowned specialists, the chapters reflect valuable insights to students and researchers in both cross-cultural and social psychology.