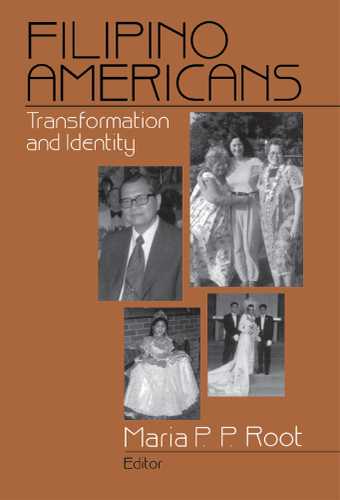 "Maria P. P. Root′s new edited volume on Filipino American makes an outstanding contribution in terms of exploring the socio-economic integration and the transformation of ethnic identities among one of the largest, fastest growing, but least studied Asian American groups in the United States - Filipinos. . . . One unique area covered by this book is its thoughtful reflection on the impacts of colonization on Filipino literature and the articulation of Filipino identities . . . . The book provides an unusual breadth of information on Filipino lives in the U.S.A. . . . I found this book very valuable as an introductory text in an undergraduate curriculum on Asian American studies, and in racial and ethnic studies. The power of the book lies in its ability to render problematic the stereotypes of Asian Americans, and to question the preconceived categories of race, culture, and ethnicity. The book′s discussion and reflection on identities is provocative and accessible to students."

--Journal of Ethnic and Migration Studies

"Maria P. P. Root succeeds where many ethnic-specific anthologies fail: focusing on the issue of a people′s identity while avoiding boxing them in. . . . What is refreshing about this volume is not only the variety of perspectives, but the different styles. . . . Root and the contributors succeed in living up to the hope stated in the book′s introduction, ′′that these pages will offer challenging questions, some refreshing analysis, and new paradigms for interpreting the Filipino American experience.′′

Typically, when Asian Americans are discussed in the media, the reference is to people of Chinese or Japanese descent. However, the largest Asian American ethnic group is Filipino-a group about which little is known or written, even though Filipinos have a long-standing history with the United States through colonization that effects how this group is viewed and views themselves. Aimed at rectifying this information dearth, this volume presents the first interdisciplinary analysis of who Filipinos are and what it means to be a Filipino American. With contributions from historians, social workers, community leaders, ethnic studies scholars, sociologists, educators, health care workers, political scientists, and psychologists, this book addresses such issues as ethnic identity, the impact of different colonizations on ethnic identity, personal and family relationships, mental health, race, and racism. In addition, the sociopolitical context is examined in each social-issues chapter to make the volume more useful as a foundational tool for hypothesis generation, empirical research, policy analysis and planning, and literature review. This book offers readers a rich and varied portrait of our largest Asian American ethnic group.