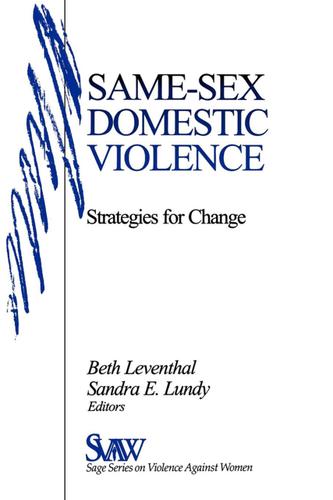 While a great deal has been written about domestic violence, almost all of it focuses on the violence of men against their current or former wives or girlfriends. Yet studies have shown that partner abuse is common and as severe among same-sex couples as among heterosexual couples. After years of willful or negligent silence, the gay/lesbian/bisexual communities, the battered women′s communities, academicians, and even portions of the general public are beginning to realize that same-sex domestic violence is a serious social and public health issue.

This book examines a broad range of issues that confront victims of same-sex domestic violence, whether women or men, and those who offer them services. The goal is to provide a comprehensive resource book consisting of chapters by prominent professionals and activists on topics of practical concern to people who work with victims of same-sex partner abuse, Topics such as HIV, and same-sex domestic violence, establishing safe-home networks for battered gay men, courtroom advocacy, coalition building, and sexual and dating violence prevention. In each chapter, authors are sensitive and responsive to multicultural issues and to broad issues of social oppression and avoid "one-size-fits-all" assumptions and conclusions.