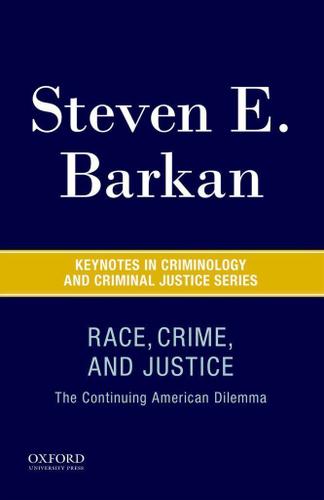 Brief, timely, and accessible, Race, Crime, and Justice: The Continuing American Dilemma examines many critical issues including why, over the past few decades, African Americans, Latinos, and Native Americans were swept into jails and prisons at rates far beyond their share of the national population. Steven E. Barkan explores racial/ethnic disparities in criminal justice involvement; discrimination in policing, prosecution, and sentencing; the rise and collateral consequences of mass incarceration; racial bias in news media coverage of crime; racial/ethnic differences in rates of criminal behavior and victimization; and social and criminal justice policies that, if successfully implemented, would help correct many of the injustices in the criminal justice system.

About the Series
Keynotes in Criminology and Criminal Justice provides essential knowledge on important contemporary matters of crime, law, and justice to a broad audience of readers. Volumes are written by leading scholars in that area. Concise, accessible, and affordable, these texts are designed to serve either as primers around which courses can be built or as supplemental books for a variety of courses.