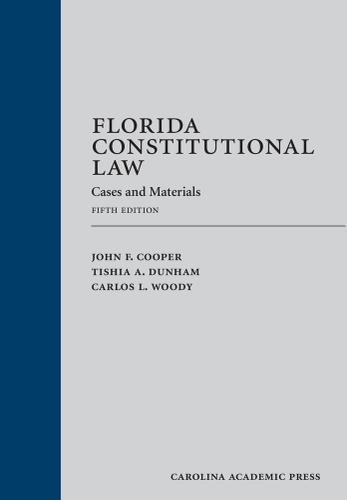 Florida Constitutional Law, a casebook used in Florida since 1992, is now in its fifth edition. Authors Cooper, Dunham and Woody include the functions of a state constitution and how the Florida constitution is amended; separation of power issues; the major constitutional limits on legislative power; the constitutional jurisdiction of Florida courts, as well as the separation of powers limits on the courts that resemble the Article III limits on federal judicial power; units of local government and their relationship to the state and each other; the major constitutional limitations on taxation and borrowing; a selected review of various provisions of the Declaration of Rights, including Floridas privacy guarantee (which is far more extensive than privacy under the United States Constitution); and Floridas homestead provision. The authors have made this edition more user friendly than the fourth edition and have created an accompanying teachers manual.