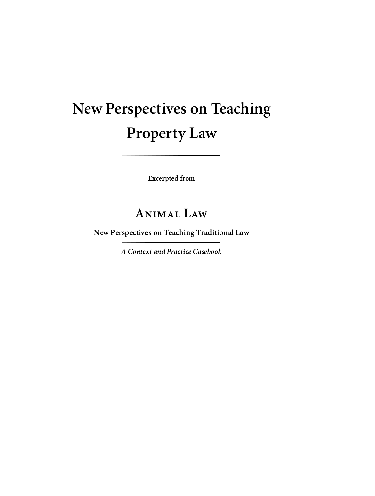 (This is just the PROPERTY LAW chapter from ANIMAL LAW--NEW PERSPECTIVES ON TEACHING TRADITIONAL LAW (Hessler et al).)
Animal Law poses a fundamental question: How is the legal analysis of property law affected when the interests of sentient (but non-human) beings are considered? Because our legal system treats animals as property in some cases, and as quasi-property beings in other cases, judges and legislatures are creating new rules to balance existing law with a growing recognition of the special character of living forms of property. This chapter also considers the core question of whether animals should be removed from the property status. Reviewing animal law cases will encourage students to think critically and question the function of certain legal constructs that, in many respects, have not been rigorously challenged for more than a century.