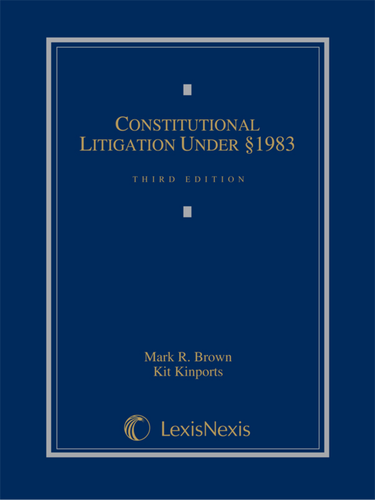 Constitutional Litigation Under Section 1983 exhaustively analyzes the varied problems that arise in civil rights suits alleging violations of the United States Constitution. The cases, questions, and commentary not only survey the stumbling blocks plaintiffs and defendants are likely to encounter in this type of federal litigation, but also address peculiar problems that tend to arise with specific constitutional rights such as the Fourth Amendment's proscription on unreasonable searches and seizures, the Fifth Amendment's requirement of just compensation, and the Due Process Clause's requirements for properly extracting taxes. Topics include:

The elements of a Section 1983 claim;
Sovereign immunity and the Eleventh Amendment's protection of state governments;
Local government liability for constitutional wrongs;
The availability of damages, declaratory judgments, and injunctive relief;
Absolute and qualified immunities for governmental officials;
Exhaustion of remedies before state agencies and courts;
Choice of law issues;
Res judicata and collateral estoppel;
Federal abstention doctrines;
The availability of relief against private persons; and
The availability of fee-shifting for successful litigants.
This book focuses on the particular problems that arise in litigation against states, local governments, and their agents under the United States Constitution. Constitutional Litigation Under Section 1983 is constructed to serve as the principal reading for a two- or three-hour course. The book uses the United States Constitution as a tool to convey to the student a succinct understanding of the policies, procedures, problems, and precedents that surround federal litigation with the government.