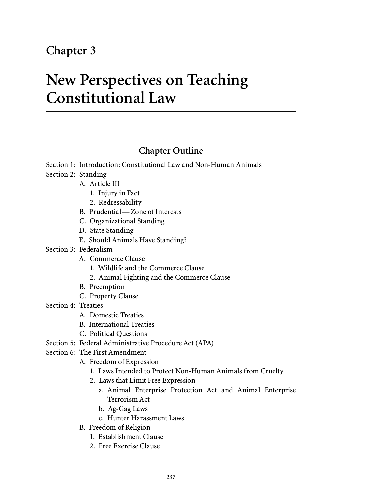 (This is solely the CONSTITUTIONAL LAW chapter from ANIMAL LAW--NEW PERSPECTIVES ON TEACHING TRADITIONAL LAW (Hessler et al).)
Studying cases that involve sentient living beings enables students to think more deeply about the role of contracts in American society. Issues raised by animal law cases include: whether the legal system adequately addresses the interests of animals in contracts in which they are the subject matter; and, whether, in a contract dispute, the animal(s) can or should be considered an interested party. More specifically, this chapter includes issues relating to leases, condominium bylaws and custody disputes, to name a few, where companion animals are at the heart of the dispute (both literally and figuratively).