Photographic and Descriptive Musculoskeletal Atlas of Gibbons and Siamangs (Hylobates)

With Notes on the Attachments, Variations, Innervation, Synonymy and Weight of the Muscles 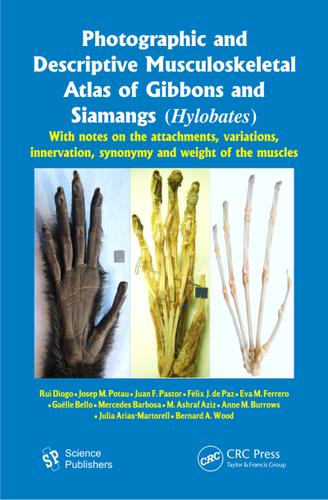 This book is the first photographic and descriptive musculoskeletal atlas of Hylobates, and adopts the same format as the photographic atlas of Gorilla published by the same authors in 2010. These two books are part of a series of monographs that will set out the comparative and phylogenetic context of the gross anatomy and evolutionary history of the soft tissue morphology of modern humans and their closest relatives. This atlas, which includes detailed high-quality photographs of musculoskeletal structures from most anatomical regions of the body as well as textual information about the attachments, innervation and weight of the respective muscles, is based on dissections and on an extensive review of the literature. It provides an updated review of the anatomical variations within hylobatids as well as an extensive list of the synonyms used in the literature to designate the structures we discuss. The atlas will be of interest to students, teachers and researchers studying primatology, comparative anatomy, functional morphology, zoology, and physical anthropology and to medical students, doctors and researchers who are curious about the origin, evolution, homology and variations of the musculoskeletal structures of modern humans.