Toward a Constitutional Perspective, Second Edition 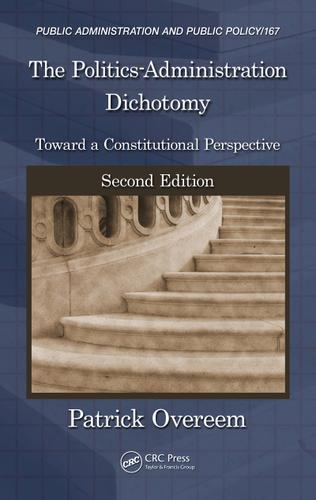 The politics-administration dichotomy is much mentioned and often criticized in the Public Administration literature. The Politics-Administration Dichotomy: Toward a Constitutional Perspective, Second Edition offers a book-length treatment of this classical notion. While public administration academics typically reject it as an outdated and even dangerous idea, it re-emerges implicitly in their analyses. This book tells the story of how this has happened and suggests a way to get out of the quandary. It analyzes the dichotomy position in terms of content, purpose, and relevance.What’s in the Second Edition

Completely revised and updated, the book examines the idea that politics and public administration should be separated in our theories and practices of government. A combination of history of ideas and theoretical analysis, it reconstructs the dichotomy’s conceptual origins and classical understandings and gives an assessment of the main criticisms raised against it and the chief alternatives suggested for it. Arguing that one-sided interpretations have led to the dichotomy’s widespread but wrongful dismissal, the study shows how it can be recovered as a meaningful idea when understood as a constitutional principle. This study helps readers make sense of highly confused debates and challenge the issues with an original and provocative stance.