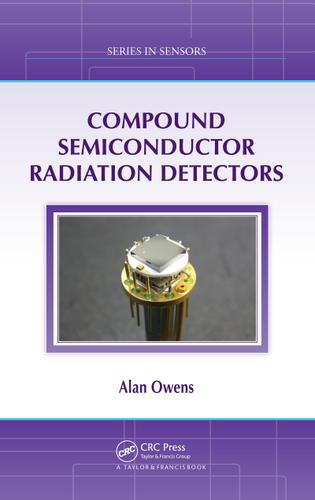 Although elemental semiconductors such as silicon and germanium are standard for energy dispersive spectroscopy in the laboratory, their use for an increasing range of applications is becoming marginalized by their physical limitations, namely the need for ancillary cooling, their modest stopping powers, and radiation intolerance. Compound semiconductors, on the other hand, encompass such a wide range of physical and electronic properties that they have become viable competitors in a number of applications. Compound Semiconductor Radiation Detectors is a consolidated source of information on all aspects of the use of compound semiconductors for radiation detection and measurement.
Serious Competitors to Germanium and Silicon Radiation Detectors

Wide-gap compound semiconductors offer the ability to operate in a range of hostile thermal and radiation environments while still maintaining sub-keV spectral resolution at X-ray wavelengths. Narrow-gap materials offer the potential of exceeding the spectral resolution of germanium by a factor of three. However, while compound semiconductors are routinely used at infrared and optical wavelengths, their development in other wavebands has been plagued by material and fabrication problems. So far, only a few have evolved sufficiently to produce commercial detection systems.

A timely resource for the established researcher, this book serves as a comprehensive and illustrated reference on material science, crystal growth, metrology, detector physics, and spectroscopy. It can also be used as a textbook for those new to the field of compound semiconductors and their application to radiation detection and measurement.