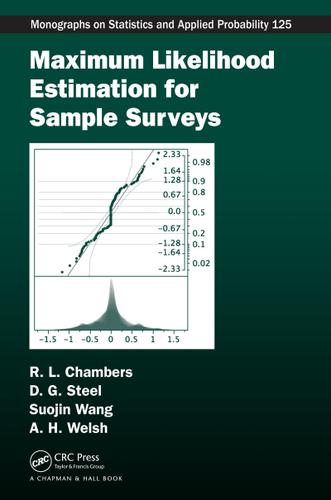 Sample surveys provide data used by researchers in a large range of disciplines to analyze important relationships using well-established and widely used likelihood methods. The methods used to select samples often result in the sample differing in important ways from the target population and standard application of likelihood methods can lead to biased and inefficient estimates.
Maximum Likelihood Estimation for Sample Surveys presents an overview of likelihood methods for the analysis of sample survey data that account for the selection methods used, and includes all necessary background material on likelihood inference. It covers a range of data types, including multilevel data, and is illustrated by many worked examples using tractable and widely used models. It also discusses more advanced topics, such as combining data, non-response, and informative sampling.

The book presents and develops a likelihood approach for fitting models to sample survey data. It explores and explains how the approach works in tractable though widely used models for which we can make considerable analytic progress. For less tractable models numerical methods are ultimately needed to compute the score and information functions and to compute the maximum likelihood estimates of the model parameters. For these models, the book shows what has to be done conceptually to develop analyses to the point that numerical methods can be applied.

Designed for statisticians who are interested in the general theory of statistics, Maximum Likelihood Estimation for Sample Surveys is also aimed at statisticians focused on fitting models to sample survey data, as well as researchers who study relationships among variables and whose sources of data include surveys.