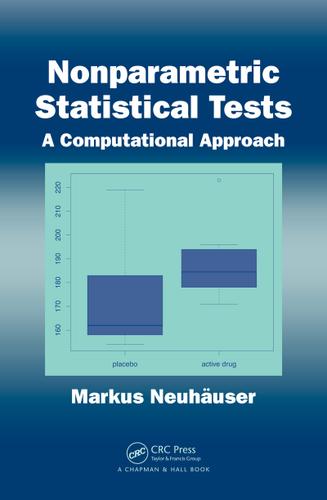 Nonparametric Statistical Tests: A Computational Approach describes classical nonparametric tests, as well as novel and little-known methods such as the Baumgartner-Weiss-Schindler and the Cucconi tests. The book presents SAS and R programs, allowing readers to carry out the different statistical methods, such as permutation and bootstrap tests. The author considers example data sets in each chapter to illustrate methods. Numerous real-life data from various areas, including the bible, and their analyses provide for greatly diversified reading.

Nonparametric two-sample tests for the location-shift model, specifically the Fisher-Pitman permutation test, the Wilcoxon rank sum test, and the Baumgartner-Weiss-Schindler test
Permutation tests, location-scale tests, tests for the nonparametric Behrens-Fisher problem, and tests for a difference in variability
Tests for the general alternative, including the (Kolmogorov-)Smirnov test, ordered categorical, and discrete numerical data
Well-known one-sample tests such as the sign test and Wilcoxon’s signed rank test, a modification suggested by Pratt (1959), a permutation test with original observations, and a one-sample bootstrap test are presented.
Tests for more than two groups, the following tests are described in detail: the Kruskal-Wallis test, the permutation F test, the Jonckheere-Terpstra trend test, tests for umbrella alternatives, and the Friedman and Page tests for multiple dependent groups
The concepts of independence and correlation, and stratified tests such as the van Elteren test and combination tests
The applicability of computer-intensive methods such as bootstrap and permutation tests for non-standard situations and complex designs

Although the major development of nonparametric methods came to a certain end in the 1970s, their importance undoubtedly persists. What is still needed is a computer assisted evaluation of their main properties. This book closes that gap.