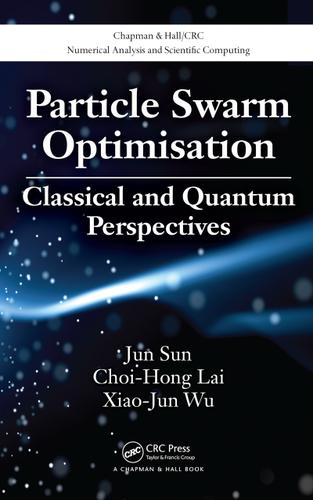 Although the particle swarm optimisation (PSO) algorithm requires relatively few parameters and is computationally simple and easy to implement, it is not a globally convergent algorithm. In Particle Swarm Optimisation: Classical and Quantum Perspectives, the authors introduce their concept of quantum-behaved particles inspired by quantum mechanics, which leads to the quantum-behaved particle swarm optimisation (QPSO) algorithm. This globally convergent algorithm has fewer parameters, a faster convergence rate, and stronger searchability for complex problems.

Moving on to the QPSO algorithm, the authors give a thorough overview of the literature on QPSO, describe the fundamental model for the QPSO algorithm, and explore applications of the algorithm to solve typical optimisation problems. They also discuss some advanced theoretical topics, including the behaviour of individual particles, global convergence, computational complexity, convergence rate, and parameter selection. The text closes with coverage of several real-world applications, including inverse problems, optimal design of digital filters, economic dispatch problems, biological multiple sequence alignment, and image processing. MATLAB®, Fortran, and C++ source codes for the main algorithms are provided on an accompanying CD-ROM.

Helping you numerically solve optimisation problems, this book focuses on the fundamental principles and applications of PSO and QPSO algorithms. It not only explains how to use the algorithms, but also covers advanced topics that establish the groundwork for understanding state-of-the-art research in the field.