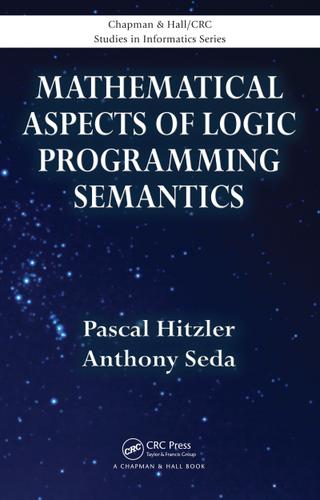 Covering the authors’ own state-of-the-art research results, Mathematical Aspects of Logic Programming Semantics presents a rigorous, modern account of the mathematical methods and tools required for the semantic analysis of logic programs. It significantly extends the tools and methods from traditional order theory to include nonconventional methods from mathematical analysis that depend on topology, domain theory, generalized distance functions, and associated fixed-point theory.

The book covers topics spanning the period from the early days of logic programming to current times. It discusses applications to computational logic and potential applications to the integration of models of computation, knowledge representation and reasoning, and the Semantic Web. The authors develop well-known and important semantics in logic programming from a unified point of view using both order theory and new, nontraditional methods. They closely examine the interrelationships between various semantics as well as the integration of logic programming and connectionist systems/neural networks.