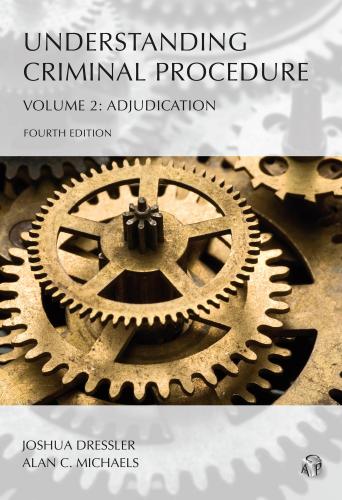 The Fourth Edition of this clearly written Understanding treatise is new in many respects. Most significantly, it has been enlarged to two volumes. Volume One: Investigation is intended for use in criminal procedure courses focusing primarily or exclusively on the police investigatory process. Volume Two: Adjudication covers the criminal process after the police investigation ends and the adjudicative process commences.

The text covers the most important United States Supreme Court cases in the field. Where pertinent, the Federal Rules of Criminal Procedure, federal statutes, and lower federal and state court cases are considered. The broad overarching policy issues of criminal procedure are laid out and some of the hottest debates in the field are considered in depth and objectively. The authors have also included citations to important scholarship, both classic and recent, into which readers may delve more deeply regarding specific topics.