On Standard English, Its Speakers, and Others in the Long Eighteenth Century 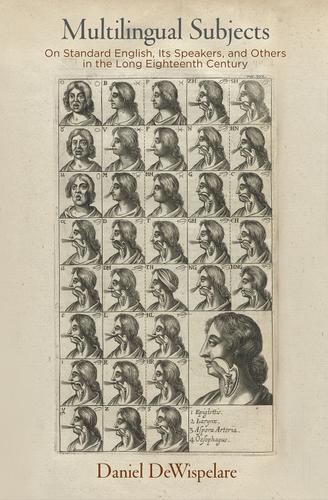 In the eighteenth century, the British Empire pursued its commercial ambitions across the globe, greatly expanding its colonial presence and, with it, the reach of the English language. During this era, a standard form of English was taught in the British provinces just as it was increasingly exported from the British Isles to colonial outposts in North America, the Caribbean, South Asia, Oceania, and West Africa. Under these conditions, a monolingual politics of Standard English came to obscure other forms of multilingual and dialect writing, forms of writing that were made to appear as inferior, provincial, or foreign oddities.

Daniel DeWispelare's Multilingual Subjects at once documents how different varieties of English became sidelined as "dialects" and asserts the importance of both multilingualism and dialect writing to eighteenth-century anglophone culture. By looking at the lives of a variety of multilingual and nonstandard speakers and writers who have rarely been discussed together—individuals ranging from slaves and indentured servants to translators, rural dialect speakers, and others—DeWispelare suggests that these language practices were tremendously valuable to the development of anglophone literary aesthetics even as Standard English became dominant throughout the ever-expanding English-speaking world.

Offering a prehistory of globalization, especially in relation to language practices and politics, Multilingual Subjects foregrounds the linguistic multiplicities of the past and examines the way these have been circumscribed through standardized forms of literacy. In the process, DeWispelare seeks to make sense of a present in which linguistic normativity plays an important role in determining both what forms of writing are aesthetically valued and what types of speakers and writers are viewed as full-fledged bearers of political rights.