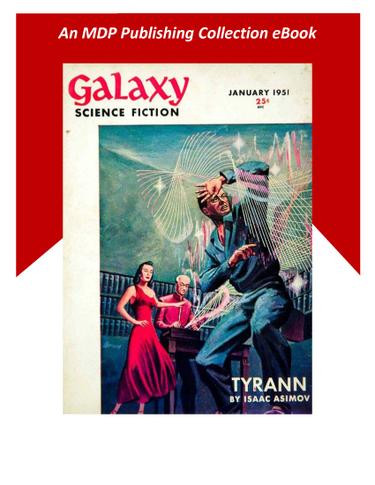 Science Fiction's Original Classic Magazine!This digitally reproduced full edition replica of Galaxy Science Fiction's ground-breaking magazine issue from January 1951 has been brought back to life for a new generation of fans to enjoy! Stories by Isaac Asimov, Fritz Leiber, Theodore Sturgeon and more! Explore the possibilities of life in the future from the perspective of the 1950's pre-spaceflight era. Several of the stories and commentaries in this 65+ year-old publication are stunningly accurate, while others are amusingly way off base . . .or are they??. All are well written and entertaining, with beautiful illustrations and advertisements in the classic 1950's comic book style.

Along with commentary by editor H.L. Gold, each Galaxy issue also contains a book review column by anthologist Groff Conklin, and a Willy Ley science column. The stories in this magazine are written by some of science fiction's most beloved authors, including Isaac Asimov, Ray Bradbury, Robert Sheckley, Fritz Leiber, Frederik Pohl & C.M. Kornbluth, just to name a few.

This January 1951 issue does not disappoint with stories from ISAAC ASIMOV and THEODORE STURGEON, among others.

Established in 1950, Galaxy Science Fiction was a pioneer in Science Fiction magazine publishing. Original editor H. L. Gold was interested in sociology, psychology, and other "soft" sciences, and was also willing to publish humorous and satirical stories.

Science Fiction historian David Kyle commented in his book A Pictorial History of Science Fiction, 1979, that "of all the editors in and out of the post-war scene, the most influential beyond any doubt was H. L. Gold". The editorship of Galaxy passed from H.L. Gold to Frederik Pohl and then to Ejler Jakobsson during the 1960s.