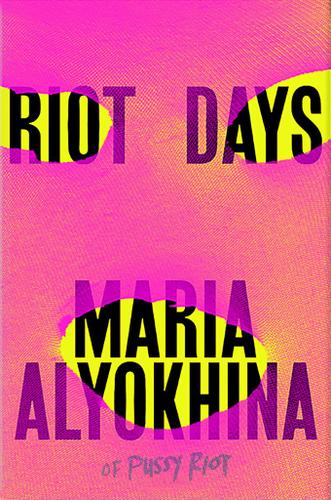 A Pussy Rioter’s riveting, hallucinatory account of her years in Russia’s criminal system and of finding power in the most powerless of situations

In February 2012, after smuggling an electric guitar into Moscow’s iconic central cathedral, Maria Alyokhina and other members of the radical collective Pussy Riot performed a provocative “Punk Prayer,” taking on the Orthodox church and its support for Vladimir Putin’s authoritarian regime.

For this, they were charged with “organized hooliganism” and were tried while confined in a cage and guarded by Rottweilers. That trial and Alyokhina’s subsequent imprisonment became an international cause. For Alyokhina, her two-year sentence launched a bitter struggle against the Russian prison system and an iron-willed refusal to be deprived of her humanity. Teeming with protests and police, witnesses and cellmates, informers and interrogators, Riot Days gives voice to Alyokhina’s insistence on the right to say no, whether to a prison guard or to the president. Ultimately, this insistence delivers unprecedented victories for prisoners’ rights.

Evocative, wry, laser-sharp, and laconically funny, Alyokhina’s account is studded with song lyrics, legal transcripts, and excerpts from her jail diary—dispatches from a young woman who has faced tyranny and returned with the proof that against all odds even one person can force its retreat.