White Indian Boy My Life Among the Shoshones

The autobiography of Elijah Nicholas Wilson 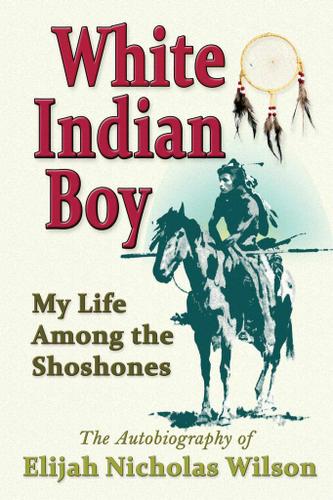 This is the true story of a pioneer boy who crossed the plains by ox-team with his parents to a settlement south of the Great Salt Lake. Pioneer life in the 1850s was extremely difficult for the pioneers, food was scarce, work was hard, and marauding Indians keep everyone on constant alert.

With the promise of great adventure and a better life, 11-year-old Nick Wilson ran away from home with an Indian who had befriended him. The mother of Chief Washakie, a prominent Shoshone chief, had lost her youngest son in an avalanche. She adopted the white boy as her own. Nick spent the next two years with the Shoshone learning their language and culture and developing the skills of a hunter. He participated in buffalo hunts, fought off grizzly bears, witnessed Indian wars, and even survived being shot in the head with an arrow and left to die.

Later, he became a trapper, was one of the original Pony Express riders, worked as an overland stagecoach driver, and served as an army scout and interpreter. He was often called to track down and negotiate peace with renegade Indians who had fled the reservation and threatened war. He found himself in danger numerous times and participated in many skirmishes with both Indians and outlaws. Growing up among the Shoshones taught him the skills he needed to survive the rough and wild west.