Fifty Years On the Trail 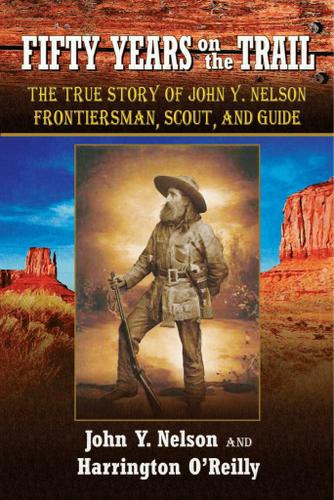 This is the true story of John Young Nelson, an early American frontiersman, military scout, interpreter, guide, police chief, and saloon owner. Born in Virginia in 1826, Nelson ran away from home as a young teenager to escape a domineering father and to seek adventure in the west. He took odd jobs along with way working on farms, serving as a cabin boy on a Mississippi steamer, and becoming an apprentice with a group of traders traveling west from Missouri. After meeting a band of Sioux, he decided that the nomadic life of an Indian was the adventure he was looking for and got himself adopted into the tribe. Here he learned how to live off the land and acquired the skills of a Sioux warrior. His adopted father was the Chief Spotted Tail and his brother-in-law was Red CloudChief of the Sioux Nation.

As a young Sioux brave, Nelson participated in Indian raids and skirmishes. Later, he guided Brigham Young and the first group of Mormon pioneers into the Salt Lake Valley in 1847, worked as a military scout with William F. Cody (Buffalo Bill), fought in the Indian Wars, and served as a lawman in North Dakota. In his many escapades he often narrowly escaped death from bullets, arrows, and knives. Nelsons story is a fascinating view of the early American west in all its glory.