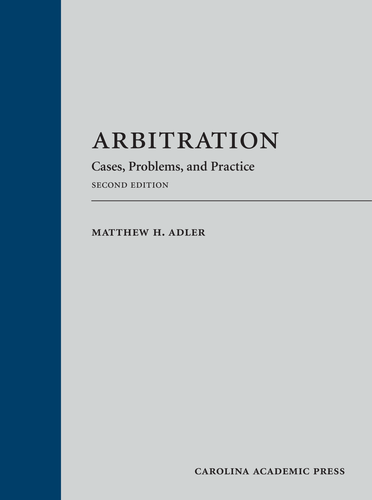 The goal of this book is to create good arbitration lawyers. Written by a practicing attorney and law professor with over 30 years of experience, it presents current caselaw and real-world practice pointers to teach future lawyers how to win their arbitration cases from the earliest procedural stage. The book is organized around the three phases of an arbitration: forming it, conducting it, and enforcing it. One chapter guides students through an actual arbitration from start to finish, including the organizational conference, discovery issues, third-party witness issues, and expert witness issues. The second edition reflects numerous legal and societal changes in the past five years that are not reflected in any other arbitration casebook on the market. These include:

- the ongoing legal and political debate on class action bans in arbitration clauses, which raises fundamental access to court issues, including the seminal 2018 SCOTUS decision in Epic Systems
- the impact of the #MeToo movement on arbitration clauses in sexual harassment cases
- the continued battle over arbitrator diversity, spearheaded by the entertainer Jay Zs 2018 petition alleging discrimination in the American Arbitration Associations arbitrator rosters
- the chaos created by the ambiguous manifest disregard standarddoes it allow for appeal of arbitration awards or not?and how the New York courts dealt with this issue
- the new "Prague Rules" in international arbitration by which Eastern European and Russian lawyers advocate for less discovery and more arbitrator control