The Bates Must Play Movement 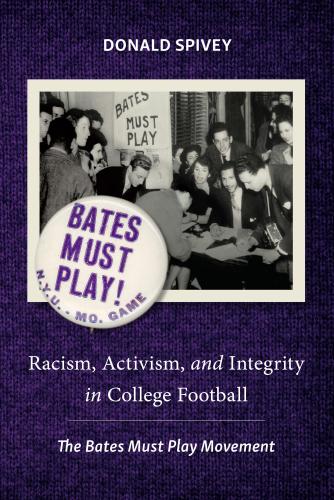 It was a front-page story in the New York Times that New York University decided to honor seven students who, sixty years earlier, the University disciplined and punished. The Bates 7, as the protest leaders became known, took constructive action when rumors spread in the fall of 1940 that black star running back Len Bates was going to be left behind when the football team ventured down to Columbia, Missouri to play the University of Missouri Tigers. They heard that Missouri invoked the gentlemens agreement and would not allow an interracial sporting event in Columbia. The protests grew in size, eventually numbering thousands of protesters, and impacted collegiate athletics throughout the nation. The Bates 7 protest made a significant contribution to the national civil rights movement that would follow.

This is the first and only book-length account of the protests that occurred at NYU that helped to change college sports forever. It is the story of Len Bates and the seven brave students who did not compromise in their fight against Jim Crow in college football. The study is based on extensive and exclusive interviews with Len Bates and the Bates 7 and in-depth research into the movement and the era.

Donald Spivey is Distinguished Professor of History at the University of Miami and Special Advisor to the President on Racial Justice. This is his third book with CAP. He is the author or editor of ten books, including the award winning If You Were Only White: The Life of Leroy Satchel Paige.