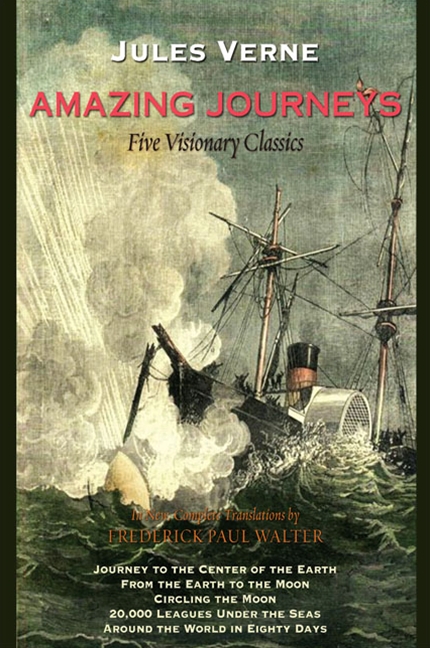 "One of the best storytellers who ever lived."--Arthur C. Clarke

In one dazzling decade, French novelist Jules Verne took readers places they'd never gone before. . .the age of dinosaurs. . .the undersea realm of Atlantis. . .the craters and crevices of the moon. . .and a whirlwind aerial tour of the planet earth!

Though he penned his unforgettable yarns in French, Verne plunked big parts of them down in America. And he himself possessed an American sassiness, nerve, and sense of humor, so Americans have returned the compliment: we've released dozens of Hollywood films based on his astonishing tales, and we've created the U.S.S. Nautilus, the NASA space missions, and other technological triumphs that have turned Verne's visions into practical reality.

Here are Jules Verne's best-loved novels in one convenient omnibus volume, but with a huge difference. This book features new, accurate, accessible, and unabridged translations of these five visionary classics, translations that are complete down to the smallest substantive detail, that showcase Verne's farseeing science with unprecedented clarity and accuracy, capture the wit, prankishness, and showbiz flamboyance of one of literature's leading humorists and satirists. This is a Verne almost completely unknown to Americans. . .yet a Verne who has an uncannily American mindset!

So these heroes and happenings are part of our heritage: Phileas Fogg chugging across the wild, wild west. . .the impossible underground journey of Professor Lidenbrock. . . the deep-sea exploits of secretive Captain Nemo. . .and a moon shot so realistic, it inspired U.S. astronaut Frank Borman a full century later.

Jules Verne was a science buff with a showbiz background, and finally these classic storiess have a translator with the same orientation: Frederick Paul Walter is one of America's foremost Verne scholars. . . But he's also a scriptwriter, broadcaster, and part-time fossil hunter!

Enriched with dozens of classic illustrations, The Amazing Journeys of Jules Verne will be a family favorite in every home library.

Jules Verne was born in 1828 into a French lawyering family in the Atlantic coastal city of Nantes. Though his father sent him off to a Paris law school, young Jules had been writing on the side since his early teens, and his pet topics were the theater, travel, and science. Predictably enough, his legal studies led nowhere, so Verne took a day job with a stock brokerage, in his off hours penning scripts for farces and musical comedies while also publishing short stories and novelettes of scientific exploration and adventure.

His big breakthrough came when he combined his theatrical knack with his scientific bent and in 1863 published an African adventure yarn, Five Weeks in a Balloon. After that and till his death in 1905, Jules Verne was one of the planet's best-loved and best-selling novelists, publishing over sixty books. In addition to the five visionary classics in this volume, other imaginative favorites by him include The Mysterious Island, Hector Servadac, the Begum's Millions, Master of the World, and The Meteor Hunt. Verne ranks among the five most translated authors in history, along with Mark Twain and the Bible

.Frederick Paul Walter is a scriptwriter, broadcaster, librarian, and amateur paleontologist. A Trustee of the North American Jules Verne Society, he served as its Vice President from 2000 to 20008. Walter has produced many media programs, articles, reviews, and papers on aspects of Jules Verne and has collaborated on translations and scholarly editions of three Verne novels: The Meteor Hunt, The Mighty Orinoco, and a special edition of 20,000 Leagues Under the Seas for the U.S. Naval Institute in Annapolis. Known to friends as Rick Walter, he lives in Albuquerque, New Mexico.