The Great Road Across America 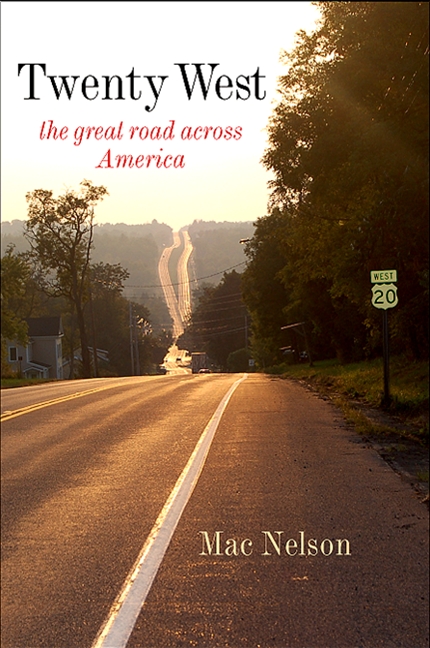 "I know US 20, I live on it, grew up near it, commute to work on it, and have run on it most mornings for twenty-five years. It has become the Main Street of my life. I am fond of it, and want to tell its very American story." — from the Introduction

Whether he's on foot, in a car, or even in a canoe, Mac Nelson will delight readers with his rambling, westward depiction of America as seen from the shoulders of its longest road, US Route 20. As the "0" in its route number indicates, US 20 is a coast-to-coast road, crossing twelve states as it meanders 3,300 miles from Boston, Massachusetts, to Newport, Oregon. Nelson, an experienced "shunpiker," travels west along the Great Road, ruminating on history, literature, scenery, geology, politics, wilderness, the Great Plains, and national parks—whatever the most interesting aspects of a particular region seem to be. Beginning with the great writers and founders of religion in the East who lived and wrote on or near US 20, including Anne Bradstreet, Phyllis Wheatley, and Sylvia Plath, then crossing the plains to the forests, mountains, and deserts of the West, Nelson's journey on this beloved road is personal and idiosyncratic, serious and comic. More than a mile-by-mile guidebook, Twenty West offers a glimpse of a boyish and very American fascination with the road that will entice the traveler in all of us to take the long way home.