The Politics and Strategy of Nuclear Weapons in the Middle East 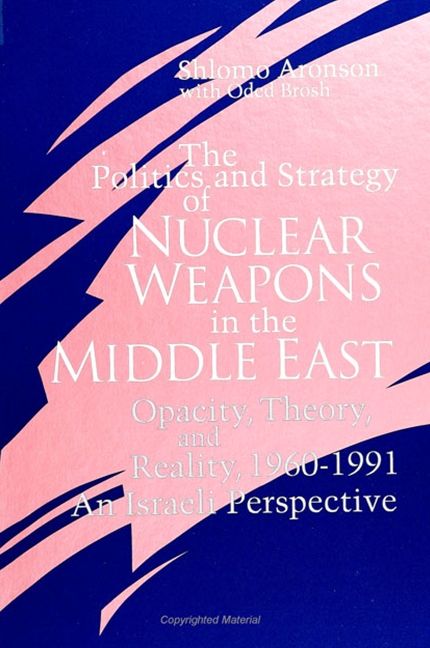 Based on research from an array of American, Arab, British, French, German, and Israeli sources, this book provides a nuclear history of the world's most explosive region. Most significantly, it gives an exposition of Israel's acquisition and political use, or nonuse, of nuclear weapons as a central factor of its foreign policy in the 1960-1991 period. In stressing the factor of nuclear weapons, the author highlights an often-neglected aspect of Israeli security policy.

This is the first interpretation of the historical development of nuclear doctrine in the Middle East that assesses the strategic implications of opacity—Israel's use of suggestion, rather than open acknowledgment, that it possesses nuclear weapons. Aronson discusses the strategic thinking of Israel, the Arab countries, the U.S., the former Soviet Union, and other countries and connects Israeli strategies for war, peace, territories, and the political economy with the use of nuclear deterrence.

The author approaches the development of Israeli doctrines on nuclear weapons and defense in general within a large matrix that includes the United States; Israeli perceptions of Arab history, culture, and psychology; and Israeli perceptions of Israel's own history, culture, and psychology. He also deals with Arab perceptions of Israel's nuclear program and with Arab and Iranian incentives to go nuclear. In addition, he discusses at length the importance of nuclear factors in the conduct of the Persian Gulf War and examines the implications of the decline of the former Soviet Union for arms control and peace in the Middle East.